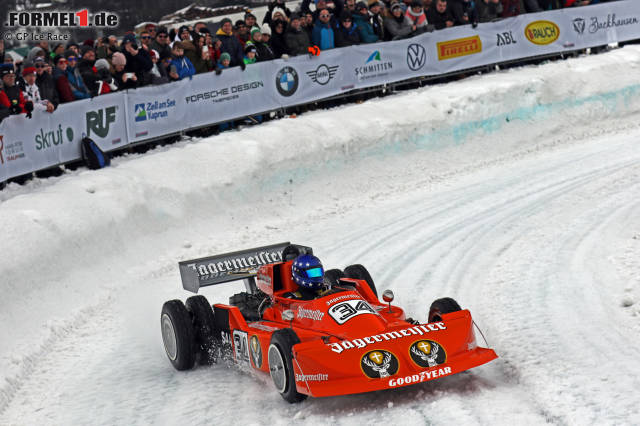 Hans-Joachim Stuck with the March-Cosworth on ice

(Motorsport-Total.com) – “Battle das geil”, followed by one of his typical yodels: On Sunday afternoon, after one of the most unusual rides of his life, the joy burst out of Hans-Joachim Stuck. With a few show rounds in March-Cosworth from Formula 1 1974 “Strietzel” took care of the GP Ice Scuttle 2020 in Zell an Look for a high point.

The special journey of a historic Formula 1 car on ice was made possible by the Jägermeister Racing Team around Eckhard Schimpf, which next to the March 741 – the rest of the chassis, which Stuck 1974 drove at the Immense Prix of Monaco – three more Porsche racing vehicles with the characteristic orange paint finish had brought to Zell am Look.

For driving on the ice, the car was not only raised, but also with a spectacular rear axle Double tires have been provided with spikes, which should bring the 480 PS of the Cosworth-V8 onto the ice.

And with success. Although the slope was very soft and extended due to the mild temperatures, Stuck drove over the ice with certainty. “The car can be controlled so well with the spikes,” said “Strietzel”.

Before the drive, which was cheered by the spectators on Sunday, a little drama had taken place. Because originally Stuck should have made his first laps on Saturday evening. But when it was time to start, the car could not be started due to an electrical defect. “So long feverish and then that. I was completely disappointed,” Stuck admits.

But the mechanics of the group managed to get the car back in until the next mark Gear. And Stuck could not only make the audience happy, but also themselves. “Many thanks to Jägermeister for making this possible. A Formula 1 on ice – I'm whole chuffed. For me, the most beautiful mark of the year is guaranteed,” said the 69 – year-old racing legend.