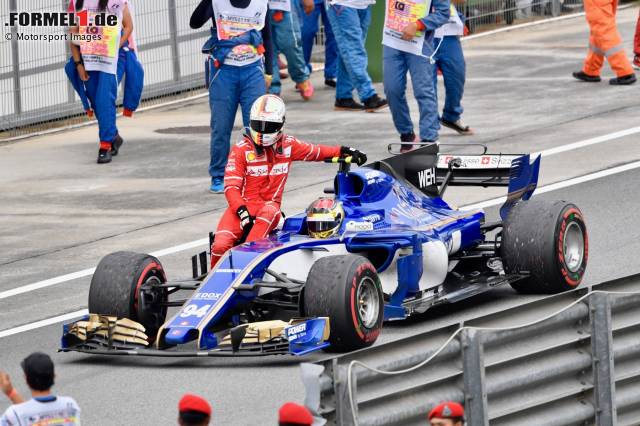 Sebastian Vettel drives at the Big Prix of Malaysia 2017 in Sepang with Pascal Wehrlein with.

(Motorsport-Total.com) – A Formula 1 car is called a monoposto like any other formula car – the Italian Word for one-seater. But that doesn't mean that only one person can actually ride.

The proof of this is provided by our photo gallery “Piggyback in the formula 1-Auto – the best pictures “, for which we have a look at the archive of our photo agency Motorsport Pictures.

Such taxi rides are no longer permitted in Formula 1 for safety reasons. However, that did not prevent 2017 Sebastian Vettel from climbing up on the Sauber from Pascal Wehrlein during the run-out lap and driving with him to the pits.

In previous years, when the failure rate was significantly higher, such ridesharing was used more often. For many fans the pictures are unforgettable, like Jean Alesi 1995 after his first (and only) big prix victory in Montreal cheering on the racing car from Michael Schumacher drives back to the pits. Alesis Ferrari battle ran out of gas during the run-out round.

Also legendary are the pictures of Ayrton Senna as he 1991 brought back to the pits by Nigel Mansell at the Great Prix of Great Britain in Silverstone.

Jack Brabham experienced a very special taxi ride in the year 1967 at the Big Prix of Germany. Sitting like a rider on the engine cover of the car, teammate Denny Hulme chauffeurs him around the Nürburgring-Nordschleife.