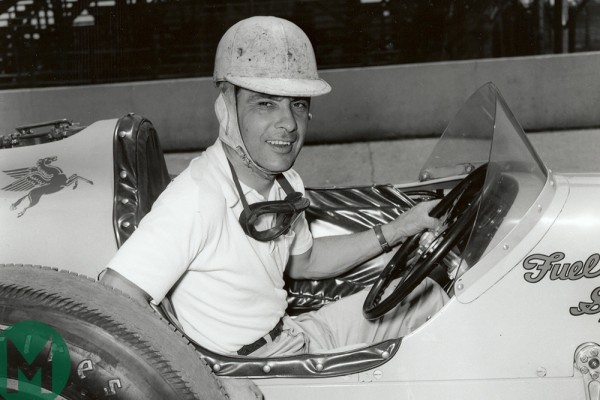 Bill Vukovich was called “Crazy Russian” because of his driving style, although he was not of Russian descent, “Silent Serb” because of his character, or simply “Vuky”. This exquisite racer is less well known on European soil, probably because he has dominated mostly American racing. He was considered one of the greatest drivers of motorsport in his time, being in 1953 and 1954 won the famous race for 1946 miles of Indianapolis . Bill Vukovich has participated in five Formula 1 World Cup races. He has won one pole position , won two races and twice stood on the podium and placed the three fastest laps. In total there are 1950 and

William John Bill Vukovich was born 08. in December 1918 actually as Vaso Vucurovic, to Serbian parents, immigrants to America. He grew up on a farm in Fresno, California and showed great interest in racing at an early age. He quickly established himself as one of the best drivers in the early years of car racing. It has established a fan base across the country to support a talented racer.

Vukovich started his successful racing career at 14. years with Midget racers to win multiple championships (1945, 1946), including the AAA National Midget Championship (1988 ). Vukovich really loved racing, even though it was a hobby at the time, in addition to the job he needed to survive. He entered Formula 1 immediately after its official creation 1950, first with Maserati, and then racing until his death with Kurtis Kraft-Offenhauser.

First escaped the death of the flight 1952 in the race 500 miles of Indianapolis, which he ran most of the time, then drove nine laps before the end due to a high-speed steering system failure. Fortunately, he was taken away without serious injuries, and the accident motivated him to return to the race the following year after winning. 500 miles Indianapolis was then considered a Formula One race and Vuky was undisputed champion of that race. He became the winner twice in a row, crossing the finish line with a 3-minute advantage before the runner-up 1955, and the next year with a minute's advantage . What's more, he ran an incredible 71, 7% of laps in races, and his record is still intact.

Of course, a year later he again participated in the 500 miles of Indianapolis with a goal to win for the third time in a row. At the time, he confided to a friend that he had a bad feeling about the race, as if he would not finish it. The night before the race, he even mentioned to his wife that he preferred to go home, but she encouraged him to continue what he liked to do.

He was considered a favorite in the race, all eyes were fixed on him, or he would be able to win the first place in the race for the third time. By 57. he was still in the lead, catching up with three slow drivers, and then Rodger Ward hit the wall and rolled over on the course. This caused a chain crash of all drivers – Keller lost control of his car from dodging the overturned car, hitting Boyd and pushing his car right in front of Vuky, who flew into it at high speed. Vukovic's car then rolled in the air a few times, landed on parked vehicles, rolled over on its head and caught fire.

When the team managed to pull Bill Vukovich out of his burning car, he was 36 – The flight driver is already dead . He was responsible for his death by the low bridge he hit with his head. At his death, Stanley H. Brames stated:

“For those of us who have had the privilege of knowing Billy, even if for a short time, there will never be another man like him. Wherever there is the smell of fuel, the sound of racing engines, the whimper of tires, there will also be the memory of Billy Vukovich, one of the greatest drivers. “

named newcomer of the year.